*This is part 3 of a 3 part series about how I discovered the rarest dog breed in America, which later led to my first novel, “Hope In Every Raindrop.”

Dr. Anderson opened the steel framed gate and we stepped into a large circular pen. Seven puppies, just nine weeks old, rough housed in the corner, but I couldn’t take my eyes off the dog to the right.

Her body was lithe and her steps were graceful. Her eyes fierce as she paced slowly in a separate enclosure.

Old farm equipment and other junk was scattered all behind her, but her presence made it all feel majestic.

She was predominantly white, with large black spots on her back, and smaller black spots scattered upon her legs. Her face was masked in black, except for subtle brown markings above her eyes. Her ears stood tall, slightly fanning in one direction, and then the other.

I walked over to the fence, but she backed away. Not out of fear. Something else.

“She got into it with some coyotes recently,” Doc said, as he walked up next to me. He pronounced it ky-oats, and for a minute I didn’t understand what he was saying. But then I saw the wound behind her right ear.

Dr. Anderson didn’t respond. He just smiled. When I looked back at the painted dog I realized what the something else was that I saw in her. She was wild.

My mom walked over with a puppy in her arms. He was eight weeks old, and his ears were already fully pricked up. His head was black, but his body had no other black markings.

“Unfortunately this one’s not for sale,” Dr. Anderson said. “I’ve never had one with a fully white body. Gotta keep him.”

My mom set the puppy back down and he scooted off towards the others.

From behind us the gate opened again and two young kids came running in, with a dog trotting behind them.

“Grandpa, we’re gonna go play with the other puppies,” the kids said in unison.

“Woah!” my mom said startled. I turned back to her and standing on its hind legs, with his forepaws stretched to her shoulders was the same dog that had followed the grandkids.

The dog pushed off my mom, leaving several dirt stains on her sleeves.

“This can’t be a Carolina Dog, too,” my mom commented.

“This is Maynard. He most certainly is a Carolina Dog.”

His fur was long and soft, drastically different than the other dogs that had short cropped coats.

“He’s a soft coat,” Dr. Anderson explained. It’s rare, but occasionally we get some soft coats in each litter. Actually there’s two soft coats in this litter that are going out to a gentlemen in Alaska soon. The others are seal coats,” Dr. Anderson continued, probably noticing my confused expression.”

The Dog Bible didn’t say anything about soft coat or seal coat, I thought.

“Are there any other soft coats available?” I asked.

“Unfortunately not. But come on, let me show you the other litter.”

We followed Dr. Anderson through another makeshift door that was barely wide enough for us to fit through. It was framed with old wood around the edges,but the center was again some type of thick wire.

As soon as we stepped into the next pen, six puppies scattered like a flock of birds.

I heard another voice from the distance. “Mr. Anderson. Mr. Anderson, we’re done.”

I looked back through the fence and two men were standing outside the front gate.

“Will you excuse me a moment?” Dr. Anderson said. “You can visit with the puppies some. I’ll be right back.”

I got the feeling she didn’t want us in here. Not with her, not with her puppies, not at all. But my mom didn’t seem to think twice.

As she made her way towards the puppies I noticed something odd about this pen. In the middle of the pen was thinly layered grass. Towards the edge of the pen, there was also grass. But in between there was a ring of dirt. As is someone had worn a path into the earth.

When my mom got close to the puppies they scattered again, along with the mother. Well, let me rephrase that. All the puppies scattered except one. One followed behind her mother as she paced around the dirt ring.

I watched for several minutes as my mother tried to scoop up one of the puppies. But each time she got near they stopped playing and bolted. Except the mother and one pup that continued to pace around the dirt ring.

I found a old white plastic chair- the kind you might see on the front porch of some poor neighborhood from the 70s- sat down, and watched my mom chase the puppies until she finally got one.

She brought them over to me one at a time and sat them in my lap. I loved the dogs. They wanted nothing to do with me. They’d rather be chewing each other’s ears or eating the dirt than sitting in my lap. But I loved them all the same. Still I couldn’t take my eyes off the one puppy that kept pacing around the ring behind her mom.

The man with the knife

I was thinking about venturing towards the mother. I thought maybe she was used to my scent, now that I’d been sitting there for a bit, when I heard Dr. Anderson yell.

My mom and I walked to the fence and watched Dr. Anderson grab one of the men we saw from earlier. The man was struggling against Dr. Anderson, but it wasn’t much use. Dr. Anderson had both hands wrapped around his shoulders and was pushing him away from the pens, until they disappeared behind some trees.

“Everything okay?” my mom asked, a hint of concern in her voice.

“Yes ma’am. He just thought he deserved some more money is all. I had them cleaning up around the house and they finished. When I told him he was getting what I promised I would pay, he pulled a knife.”

My mom’s eyes went bug wide. “He pulled a knife? What did you do?”

“Well, I took the knife from him.”

Several more hours went by. Dr. Anderson brought all the puppies into one pen, and my mom and I took turns playing with some and holding some. But I still hadn’t taken my eyes off that one. She was split away from her mom now, and playing with the other puppies.

“I don’t know.” And the truth was I didn’t know. It would have been much easier if there had been some magical connection between myself and one of the puppies, but the truth was most of them (okay, all of them) ran whenever I tried to pick them up. Sure, they ran when my mom tried to pick them up too, but I had convince myself that it just wasn’t meant to be. Still I couldn’t take my eyes off that one.

My mom looked down at her watch. “Do you want to just go and we can think about it?”

No. I don’t want to just go. I want this dog that I’ve been staring at for about three hours to mysteriously walk over to me and whisper something like, “We’re meant to be best friends, let’s go human.” But that didn’t happen.

Dr. Anderson walked back over. “So, what do you think?”

I was thinking a lot. I’m an engineer. I always think a lot. But I was really thinking that Dr. Anderson probably thought we were crazy people. Who drives from Florida to South Carolina to play with puppies for three hours and doesn’t even know if they want one?

I can’t recall ever making a decision. I can just recall the car ride home. My mom was driving, and she looked over at me. “I knew you were going to do this.”

I didn’t say anything. I was too busy watching the puppy in my lap sleep.

“What are you going to name her?”

I knew the name since I first saw the dog. But she wasn’t just a dog anymore. She was my friend.

I ran my fingers over the soft white fur on her paws, where bits of dirt were mixed in from pacing around that ring so many times.

“Well, what are you going to name her.” 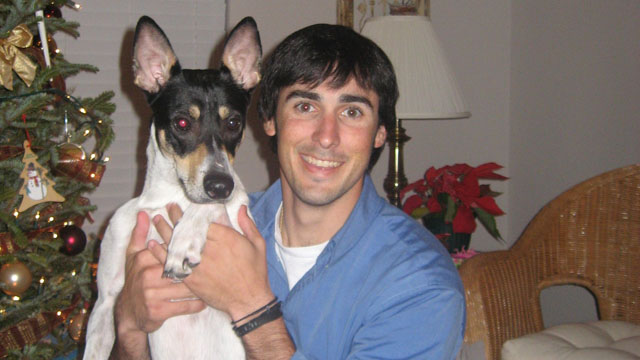 If you enjoyed this be sure to read the full series: